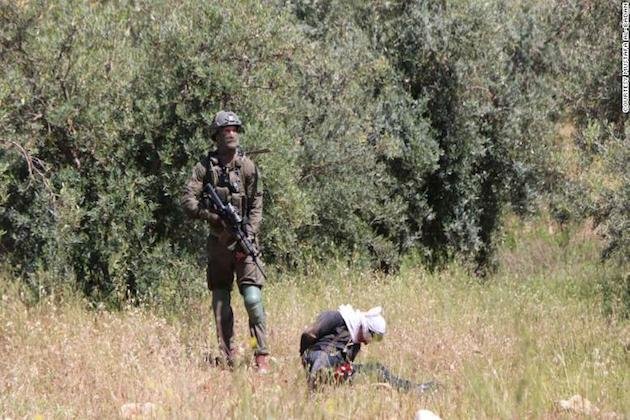 <p>WEST BANK, Palestinian territories - A bound and blindfolded 15-year old Palestinian schoolboy has been shot in both legs because, Israeli soldiers said, he was trying to flee.</p><p>The boy had been detained because there had been stone-throwing in the area. Despite denying having taken any part in throwing stones at soldiers, which occurred after the funeral of a popular Palestinian teacher, Osama al-Badan was arrested and was bound with his hands behind his back, and blindfolded and told to kneel down&nbsp; in a corner. Four fully armed soldiers had taken the boy into custody.</p><p>The incident occurred in Tuqu village, which is south of Bethlehem in the West Bank.</p><p>Video footage and photos of the arrest and shooting of the boy were captured by locals from the village who were videotaping and photographing the funeral.</p><p>Osama al-Badan is clearly seen with his hands bound behind his back, blindfolded, and surrounded by four soldiers when one lof them decides to shoot him in both legs.</p><p>This has been a practise in the Palestinian territories in the past one or two years, where soldiers aim at the legs in order to maim them. Officers have even been warning young Palesgtinians that they would be shot in the legs in order to cripple them. A number of human rights organizations including Amnesty International have alleged this has become a routine practise. Big News Network extensively <a href="https://www.bignewsnetwork.com/news/257149137/human-rights-group-accuses-israel-of-deliberately-maiming">covered this issue in a report</a> on 1 May last year.</p><p>Ali Al-Badan, <a href="https://edition.cnn.com/2019/04/23/middleeast/israel-palestinian-teen-shot-intl/index.html">the boy&#39;s father told CNN</a> he was shot once in each leg.</p><p>&quot;He was detained by the soldiers for doing nothing,&quot; he said. &quot;They accused him of throwing stones. I am sure he didn&#39;t. He has nothing to hide and would have admitted it if he did throw a stone. But is that an excuse to shoot him?&quot;</p><p>The Israeli army issued a statement saying the incident was under investigation.</p><p>They said stones had been thrown at Israeli soldiers and at cars after the funeral. It is unclear why the soldiers were present in the area. In any event when Palestinians started throwing stones at the soldiers, they responded.</p><p>&quot;The forces responded with riot dispersal means and at the same time arrested one of the rioters who tried to flee after his arrest. The arrested was detained at a nearby point and after a short time tried to flee the forces. The forces began a pursuit, during which he was shot in his lower body,&quot; the Israeli army statement said.</p><p>&quot;There have been disturbances recently towards Israeli cars and people traveling on the road close to Arab Tuqu&#39;,&quot; the statement added. &quot;These disturbances included stone-throwing and the burning of tyres.&quot;</p><p>According to CNN, one of the soldiers applied a touriquet to stem the bleeding from one of the wounds, while another soldier pointed his weapon at the Palestinians drawn to the scene to help, yelling at them &quot;Whoever comes closer, a bullet in his forehead.&quot;</p><p>A Palestinian man yells back, &quot;I want to take him to treatment,&quot; and the soldier responds: &quot;I have my own treatment.&quot;</p><p>As the tension and the shouting increase, the soldier, adccording to the CNN report, said: &quot;Treatment is coming.&quot;</p><p>After further argument the soldiers allowed the Palestinians to take the boy to hospital. His father confirmed the soldiers had told him the teenager was no longer under arrest.</p><p>CNN says it endeavoured to ascertain the legal status of the boy, but the Israeli army did not respond other than to say there was &quot;massive stone-throwing&quot; in the area and that no-one else had been arrested.</p><p>(Photo credit: Mustafa al Badan).</p><p>&nbsp;</p>

China: Covid-19 Not as Deadly as Other Coronaviruses

GENEVA, SWITZERLAND - China has published new data on more than 44,000 confirmed cases of Covid-19, which show the disease ...

Taliban confident of reaching deal with U.S. by end of month

ISLAMABAD, Pakistan - The Taliban appeared confident Monday it will sign a peace agreement with the United States by the ...

MILAN - The cardinal's response was not what Yolanda Martinez had expected - or could abide.Her son had been sexually ...

Ring of Fire next front in battle for Indigenous legal orders

The struggle over the mineral deposits in Ontario's Ring of Fire has taken a surprising turn.With all eyes on British ...

All major stock markets in Asia hit the skids Tuesday

SYDNEY, Australia - Sentiment soured on Asian bourses on Tuesday with all the major indices heading south.Apple weighed on markets ...

NEW YORK, New York - Amazon founder Jeff Bezos says he will give $10 billion of his own money to ...

LONDON, UK - Shares in the UK and Europe were on the rise on Monday, although markets were quiet with ...

Securities and Exchange Board of India to allow fintech products tests

MUMBAI, India - Stock market regulator, the Securities and Exchange Board of India (SEBI) on Monday decided to allow live ...

SYDNEY, Australia - Shares in Japan sank on Monday as the country's economy recorded its slowest quarterly growth in six ...

NEW YORK, New York - The State of New York will not be appealing the case it jointly pursued with ...