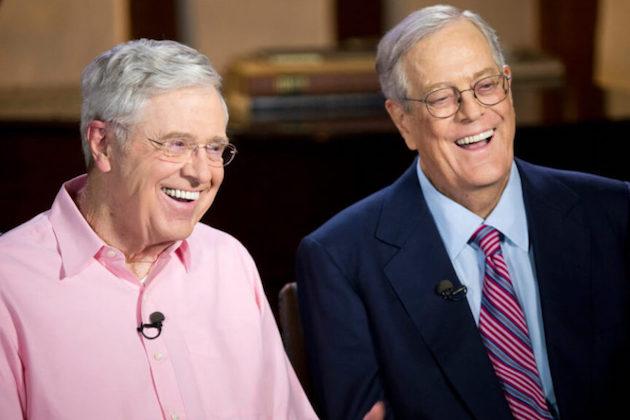 NEW YORK, New York - One of the richest men in the world died on Friday.

Multi-billionaire David Koch, who with his brother Charles ran the second biggest private company in the United States, the Kansas-based Koch Industries, died peacefully at age 79.

He was also a major philanthropist who reportedly gave $1.3 billion of his fortune away to charity.

David Koch, who lived in New York City, has often been listed in the top ten wealthiest people in the world, with a net wealth of around $50 billion.

"It is with a heavy heart that I announce the passing of my brother David," Charles Koch said in a statement Friday. "Anyone who worked with David surely experienced his giant personality and passion for life."

Charles Koch revealed his brother David had been given five years to live, 27 years ago when he was diagnosed with prostate cancer.

"David liked to say that a combination of brilliant doctors, state-of-the-art medications and his own stubbornness kept the cancer at bay," his statement said. "We can all be grateful that it did, because he was able to touch so many more lives as a result."

"In those bountiful years, he married the lovely Julia Flesher, had three exceptional children, while remaining dedicated to the long-term success of Koch Industries. David also made institution changing philanthropic commitments to hospitals, cancer research, education and the arts. The significance of David's generosity is best captured in the words of Adam Smith, who wrote, 'to indulge our benevolent affections, constitutes the perfection of human nature,'" Charles Koch said.

"While this is a very sad day for us all, I want you to know that David was proud of the extraordinary work you all have done to make Koch Industries the successful company that it is today. He will be greatly missed, but never forgotten."

David retired as executive vice president of Koch Industries in 2018. He leaves behind his wife, Julia Koch, and three beloved children. David's family released this statement on his passing:

"While we mourn the loss of our hero, we remember his iconic laughter, insatiable curiosity, and gentle heart. His stories of childhood adventures enlivened our family dinners; his endless knowledge rendered him our 'walking Google.' His sensitive heart had him shed a tear at the beauty of his daughter's ballet, and beam with pride when his son beat him at chess. We will miss the fifth link in our family.

"Yet, we wish for all to celebrate the life and impact of this most generous and kind man. He believed he had a responsibility to a world that had given him so many opportunities to succeed. David's philanthropic dedication to education, the arts and cancer research will have a lasting impact on innumerable lives - and that we will cherish forever."A major supporter of conservative causes, Koch crossed swords with U.S. President Donald Trump, being a supporter of free trade and an opponent of trade tariffs.