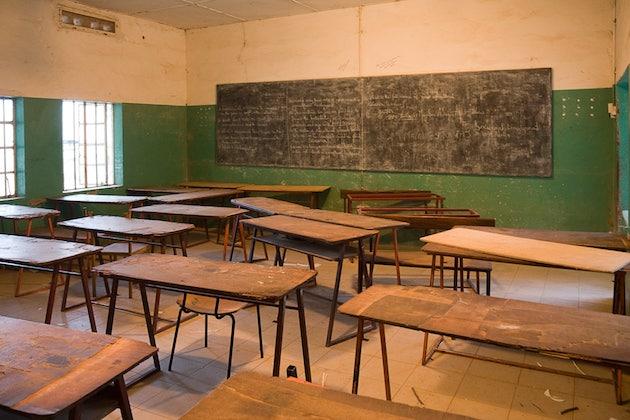 A surge in "deliberate" attacks against students, teachers and schools in West and Central Africa has led to a tripling in school closures in the last year and left almost two million youngsters "robbed of an education", the UN Children's Fund (UNICEF) said on Friday.

In a new report detailing threats of violence against schools across the region and issues as a 'Child Alert', the UN agency warned that a generation of children risks being denied the right to learn.

"Nearly two million children are out of school due to conflict, so it is not an easy number," UNICEF Goodwill Ambassador, Muzoon Almellehan, told journalists in Geneva. "It is important to highlight those challenges, to highlight the struggle of those people. They need us, they need our attention."

Data gathered by UNICEF to June indicates that 9,272 schools have been closed in Burkina Faso, Cameroon, Chad, Central African Republic, the Democratic Republic of the Congo, Mali, Niger and Nigeria as a result of insecurity - three times the number at the end of 2017.

"Schools are being shut down," according to UNICEF Deputy Executive Director, Charlotte Petri Gornitzka. "Over the past two years, the number of schools that have been shut down has tripled; over 9,000 schools due to the insecurity have been attacked."

The UNICEF report notes how spreading insecurity across north-west and south-west Cameroon has left more than 4,400 schools forcibly closed.

In Burkina Faso, more than 2,000 schools are closed, along with more than 900 in Mali, owing to increasing violence in both countries.

In the central Sahel region, moreover, Burkina Faso, Mali and Niger have witnessed a six-fold increase in school closures owing to attacks and threats of violence in just over two years, from 512 in April 2017, to more than 3,000 by June this year.

School closures in the four countries affected by crisis in the Lake Chad Basin Cameroon, Chad, Niger and Nigeria remained at around 1,000 between the end of 2017 and June 2019.

Just back from visiting a camp for people displaced by violence in central Mali, Ms. Almellehan insisted in Geneva that for many people, herself included, education was vitally important in giving children hope for a better future.

"I had to flee my homeland in Syria in 2013 and I also had to live in refugee camps," she explained. "It wasn't easy for me and also I can feel like those children who can't go to school, because education is something really, really important to me, myself."

One direct result of children not getting an education is that they are more vulnerable to recruitment by extremists or abuse at their hands such as forced marriage, the UNICEF Goodwill Ambassador insisted.

"When a child is not at a school, especially if the child suffers from a very bad economic situation, when they are in poverty, when they don't have enough awareness, all of that can affect that child and can lead that child to being exploited easily," she said.

On a wider level, the lack of schooling "is casting a foreboding shadow upon children", their families, their communities and society at large," UNICEF said in a statement, noting that more than 40 million six to 14-year-olds are already missing out on school in Central and West Africa.

The agency is working with education authorities and communities to support alternative learning opportunities including community learning centres, radio school programmes, technology for teaching and learning, and faith-based learning initiatives.

It is also providing tools for teachers who work in dangerous locations, and psychosocial support and care for schoolchildren emotionally scarred by violence.