Trump floated idea of his property being venue for G7 summit 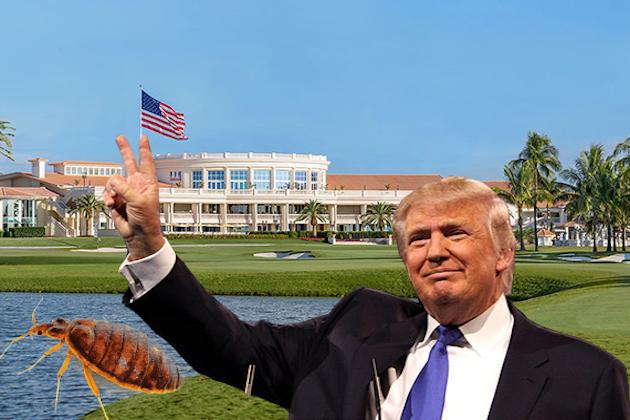 WASHINGTON, DC - At his suggestion, U.S. President Donald Trump will host next year's G7 at one of his own properties, Acting White House Chief of Staff Mick Mulvaney said Thursday.

In an astonishing revelation White House reporters were told that at an advance meeting to consider the choice of venue, Mr Trump asked the group, "What about Doral?" He was referring to the 700-room Trump National Doral Golf Club near Miami, which is reportedly struggling for business.

The group, according to Mulvaney, thought the idea of having the G7 at Doral was "not the craziest idea." A selection process followed which considered twelve venues across the country, which of course included Doral. And it was Doral that won the day.

"Aside from what your advance team did to look for the perfect place, what role did the President play in selecting Doral, including getting it on the initial list of 10 or 12 places in the first place?" the White House official was asked Thursday.

"Yeah. I think we, that's a fair question. We sat around one night. We were back in the dining room and I was going over it with a couple of our advance team. We had the list, and he goes, "What about Doral?" And it was like, "That's not the craziest idea. It makes perfect sense."

"So he's the one that initially brought it up?" the reporter asked.

Mulvaney responded: "Were all familiar with it, so its not like he said, Oh, this is what DoralDo I have to explain He said, No, what about Doral? Like, you know what, thats not the craziest idea we ever heard. And we sat down and went to go look at it."

The G7 is an international intergovernmental economic organization which comprises the seven largest advanced economies (as described by the IMF). The countries involved are the U.S., the UK, France, Germany, Italy, Canada, and Japan. Until 2014, the organization was known as the G8 and included Russia, however in 2014 Russia was suspended and formally withdrew in 2018.

Mulvaney said the president would not profit from the event, and discounted the publicity and promotion of the resort saying Mr Trump's brand is already the best known word in the English language, and it doesn't need any promotion.

"Let's talk about the site selection process because I know you folks will ask some questions about that. How do we go about doing this? First of all, we use a lot of the same criteria that have been used by past administrations. There's a long list of the accommodations on site: the ballrooms, bilateral rooms, the number of rooms, the photo ops, the support hotels that are there, the proximity to cities and airports, helicopter landing zones, medical facilities, etc.," the White House official told Thursday's press briefing.

"So we use the same set of criteria that previous administrations have used. We started with a list of about a dozen, just on paper. And we sent an advance team out to actually visit 10 locations in several states. We visited California, Colorado, Florida, Hawaii, Michigan, North Carolina, Tennessee, and Utah. Now, we got that list down to just under 10, and the advance team went out to visit those. And from there, we got down to four finalists that our senior team went out to look at. They looked at - I think it was one in Hawaii, two in Utah, and then the Doral facility in Florida."

"And it became apparent at the end of that process that Doral was, by far and away - far and away - the best physical facility for this meeting. In fact, I was talking to one of the advance teams when they came back, and I said, "What was it like?" And they said, "Mick, you're not going to believe this, but it's almost like they built this facility to host this type of event." If any of you have been there, you know that there's separate buildings with their own rooms, separate and apart from each building, so that one country can have a building, another country can have another, you folks could have your building for the press. And obviously, the common areas are going to be perfect for our needs down there," Mulvaney said.

"We had talked about the possibility of whether or not the President could actually do it at no cost, to understand there's difficulties with doing it that way. But we'll also have difficulties, obviously, if they charge market rates. So they're doing this at cost. As a result, it's actually going to be dramatically cheaper for us to do it at Doral compared to other final sites that we had," the acting White House chief of staff said.

Asked how having such a high profile event at jMr Trump's own property was not a conflict of interest, the official replied: "You know, I guess I've been the Chief now for about 9 or 10 months, and I always hear: Whenever we go to Mar-a-Lago, it's a huge branding opportunity; whenever he plays at Trump Mar-a-Lago. We play golf at Trump Bedminster. He goes to play golf at Trump, up at Sterling. And everybody asks the question: Is it not a huge marketing opportunity?"

"I would simply ask you all to consider the possibility that Donald Trump's brand is probably strong enough as it is and he doesn't need any more help on that. This is not like it's the most recognizable name in the English language and probably around the world right now. So, no, that has nothing to do with it."

"That's why - listen, I was skeptical. I was. I was aware of the political, sort of, criticism that we'd come under for doing it at Doral, which is why I was so surprised when the advance team called back and said that this is the perfect physical location to do this," Mulvaney said.

"So, I get the criticisms; so does he. Face it: He'd be criticized regardless of what he chose to do. But, no, there's no issue here on him profiting from this in any way, shape, or form."

The official said he did not have any estimates on costs but said the savings as a result of the event being staged at cost will be in the order of millions of dollars, and the cost would be half of what it would be by holding it at another venue.

"I understand that one of the advantages that the advance team came back with about Doral was the fact that it could be sequestered off from the rest of the city, and that nearly all or all of the operations could be on that one piece of property. I think there's, I think the President said there's almost 900 acres there. So it's a huge facility. And we'll be able - with a lot open space. I think there's three golf courses. So there's a lot of space available to us. And we do anticipate the entire thing being on that campus."

"We absolutely believe this is the best place to have it. We're going to have it there. And there's going to be folks who will never get over the fact that it's a Trump property. We get that. But we're still going to go there," he said.

According to The Real Deal, President Trump has previously touted Trump National Doral in federal disclosures as the Trump Organization's most profitable resort.

But according to a recent report by the Washington Post, overall revenue at the golf resort is down since 2015 and net operating income declined by 69% from 2015 to 2017.

The property is "severely under-performing" other resorts in the area, tax consultant Jessica Vachiratevanurak told a Miami-Dade County official in an attempt to reduce the property's tax bill.

Trump, The Real Deal report said, bought the 800-acre resort in 2012 for a reported $150 million. He borrowed $125 million from Deutsche Bank and embarked on a $250 million refurbishment program.

According to Wikipedia, the resort in 2017 settled out of court after a guest sued the hotel, claiming to have been bitten by bed bugs.