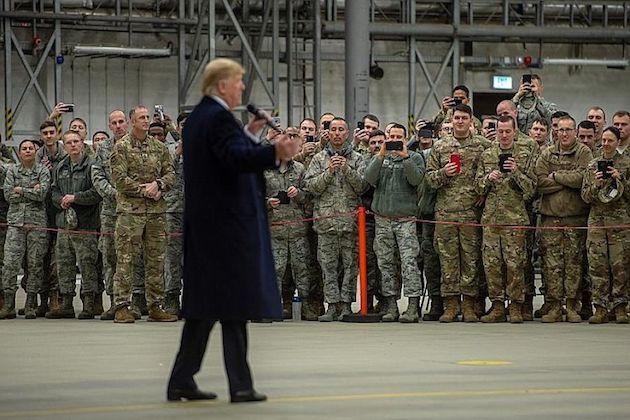 A senior administration official has told The New York Times the president has been considering the idea for about a week, during which time he has repeatedly said publicly he was bringing the troops home.

U.S. Defense Secretary, on a visit to Afghanistan on Monday reaffirmed the plan is being actively addressed as he said there are soldiers in northeast Syria that have yet to receive their marching ideas.

"We have troops in towns in northeast Syria that are located next to the oil fields, the troops in those towns are not in the present phase of withdrawal," he told reporters.

"The purpose is to deny access, specifically revenue to ISIS and any other groups that may want to seek that revenue to enable their own malign activities," he said.

The defense secretary would not confirm whether the deployment was temporary and would become permanent, other than to say the idea of keeping troops in Syria is an option under consideration.

He said there had been discussions about keeping some U.S. troops who working alongside Syrian Democratic Forces in the country, and he said the Pentagon had not yet formally put that option up.

"There has been a discussion about possibly doing it, there has been no decision with regard to numbers or anything like that," he said.

The New York Times report put the number quoted to them by a senior official at 200.

President Trump has received a huge backlash from his decision to effectively green-light a Turkish invasion of northeast Syria which began Wednesday 9 October, but is now the subject of a ceasefire or pause.

The president had said he was leaving it up to the Kurds and the Turks to fight it out, and the U.S. was butting out altogether, and all troops would be returning home.

"After defeating 100% of the ISIS Caliphate, I largely moved our troops out of Syria. Let Syria and Assad protect the Kurds and fight Turkey for their own land. I said to my Generals, why should we be fighting for Syria and Assad to protect the land of our enemy?" Trump said in a post on Twitter last week.

Then he said troops being removed from Syria would be stationed in Iraq. Now it is confirmed he is considering keeping some personnel in Syria.