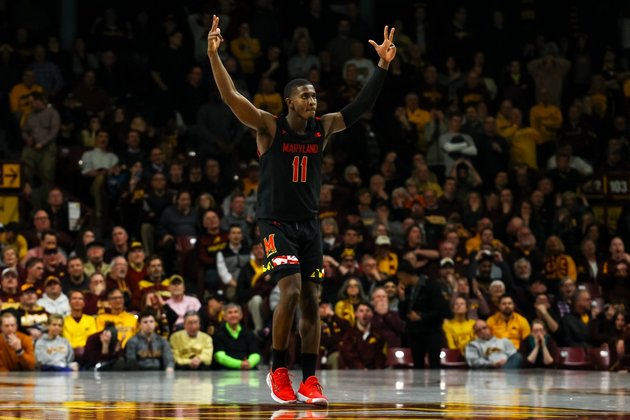 Darryl Morsell's long 3-pointer with 1.9 seconds left capped a furious comeback and allowed No. 9 Maryland to escape Minnesota with a 74-73 win Wednesday night in Minneapolis.

Jalen Smith, who played just four minutes in the first half because of foul trouble, finished with 16 points and 12 rebounds, and Aaron Wiggins also scored 16 points. Morsell had 13 points and nine boards.

Daniel Oturu put on a show with 28 points and 11 rebounds fpr Minnesota (13-14, 7-10), hitting 10 of 13 shots, but his jumper at the buzzer was far short. Marcus Carr added 19 points and seven assists for the Golden Gophers, who took their sixth loss in the past eight games.

Myles Dread drilled a 3-pointer with 28 seconds left to lift the Nittany Lions to a victory over the Scarlet Knights in University Park, Pa.

The Nittany Lions (21-7, 11-6 Big Ten) led for the first 39 minutes until Rutgers' Geo Baker hit a jumper to set up Dread's winning trey. Dread shot 3-for-9 from the field to finish with 11 points and a career-best seven assists. Reserve Izaiah Brockington led the Nittany Lions with 16 points, and he added five rebounds.

U.S. accepts help from Russia in fight against coronavirus

Moscow has the biological strains that Washington needs to create a vaccine against its 2020's uninvited guest.U.S. President Donald Trump ...

WASHINGTON, DC - As the cases of coronavirus worldwide approaches 800,000, deaths in the United States have now passed 3,700.The ...

Thousands of stranded cruise ship passengers told to 'piss off'

SYDNEY, Australia - Australia has taken a hard line, turning away six cruise ships with thousands of people on board.The ...

Chinese, Russian and European countries get OK from U.S. on Iran

PanARMENIAN.Net - The U.S. government has extended for another 60 days sanction waivers that allow Russian, Chinese, and European countries ...

Duke and Duchess of Sussex quit Canada for California

LOS ANGELES, California - Prince Harry and Meghan Markle, and their son Archie, have moved from Canada to California - ...

SYDNEY, NSW, Australia - Stocks in Asia closed sharply lower on Wednesday, except for Australia where the major index made ...

NEW YORK, New York - U.S. stocks were battered on Tuesday as traders and investors fretted about the state of ...

DUBLIN, Ireland - The European Commission on Tuesday approved a €200 million support package for Irish companies impacted by the ...

SYDNEY, Australia - Encouraging economic data out of China provided a boost to Chinese share markets on Tuesday, b ut ...

WASHINGTON, DC - U.S. airlines set to receive $25 billion in an initial tranche from the Federal Government may not ...

DUBAI, UAE - The Dubai property crash Mark II which began in 2014 is gaining momentum due to the coronavirus ...