FARGO, ND / ACCESSWIRE / February 27, 2020 / PRx Performance, a fitness equipment company based in Fargo, ND that's known for its compact home gym equipment, has recently celebrated the 4th anniversary of its appearance on Shark Tank. February 21st marks four years since the founders of the wall-mounted Profile Folding Squat Rack walked away with an $80,000 investment from shark Kevin O'Leary (Mr. Wonderful). 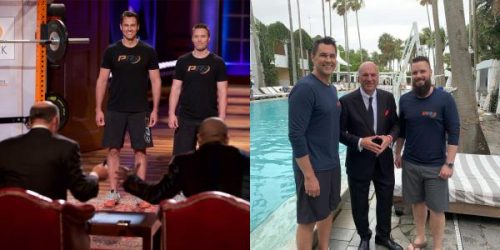 Founders Brian Brasch and Erik Hopperstad relate their experiences leading up to when they were highlighted on Shark Tank. When they arrived in Florida in January of 2015, they had to compete with 700 other entrepreneurs who were also hoping to stand out with their one-minute pitch.

To Brasch and Hopperstad's surprise, less than two weeks later, they were called back for the next round and asked to submit an official audition tape. In it, they told the story of where and why PRx Performance was created.

The company is headquartered in Fargo, North Dakota where winters are long and extreme. The idea of giving up precious garage space for a gym was unrealistic, so Brasch and Hopperstad set out to create compact home gym equipment that conveniently folds up and out of the way when not in use. Their solution was the Profile Folding Squat Rack.

When Brasch and Hopperstad entered 'The Tank', Kevin O'Leary was coincidentally in the process of getting his own home gym installed. He happened to encounter space limitation issues that PRx Performance set out to resolve, so the duo's pitch naturally piqued his interest. Despite being turned down by four sharks, Brasch and Hopperstad managed to secure a deal with O'Leary for $80,000.

While filming was completed in 2015, Brasch and Hopperstad's episode officially premiered on February 21st, 2016. Their appearance on ABC's Shark Tank marks a momentous date in PRx Performance's history as they continue to disrupt the space-saving fitness equipment industry.

Trump companies to be included in Covid-19 bailout package

WASHINGTON, DC - As part of the $2.2 trillion stimulus bill signed into law after it passed the House of ...

In an extraordinary statement titled "On the Political Impasse in Afghanistan," Washington has admitted to the failure of Secretary of ...

Dozens of sailors on board USS Teddy Roosevelt have Covid-19

BEIJING, China - Despite the lockdown in Wuhan scheduled to end on 8 April, China on Friday imposed a ban ...

LONDON, UK - British Prime Minister Boris Johnson has contracted the novel coronavirus, according to a tweet he posted on ...

CANBERRA, Australia - A 35 year old American man has been arrested and charged in the U.S. over alleged child ...

NEW YORK, New York - U.S. stocks were sold off sharply on Friday, despite the House of Represnetatives passing a ...

The coronavirus crisis has turned the fact that we don't make anything in America anymore from a topic for philosophical ...

SYDNEY, Australia - Shares were decidedly mixed across Asia on Friday. In Japan they soared in value. In Australia they ...

BRUSSELS, Belgium - The European Parliament on Thursday evening passed a $40 billion emergency package to help countries and their ...

Greenback loses lustre as stocks roar back into favour

NEW YORK, New York - The U.,S. dollar was continuing its recent correction on Friday, losing ground to the major ...

Tens of billions of dollars earmarked to prop up Singapore economy