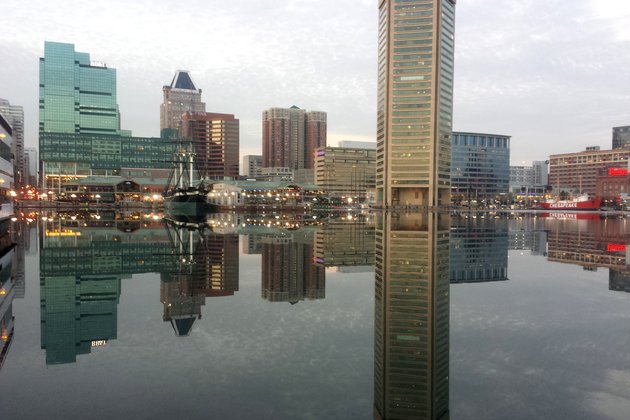 BALTIMORE - Baltimore Mayor Bernard "Jack" Young decided against imposing a citywide curfew as a large group of people marched through downtown peacefully Sunday and the city did not see the kind of destruction and violence seen in other protests around the country.

The Baltimore Sun reports that police and city leaders said they remained vigilant as protests over the death of George Floyd continue across the country. Floyd, a handcuffed black man, died last week in Minneapolis after a police officer pinned him down and kneeled on his neck for more than eight minutes as he pleaded for air. The officer has been fired and charged with murder.

On Saturday, cellphone videos captured demonstrators reprimanding agitators in the crowd who threw water bottles at police. On Sunday, a crowd chased away a man who started to cause damage along the streets.

"We were a national example of what it looks like to engage in passionate protesting without widespread breaking of the law," Young said.

Floyd's name was invoked by Malik Williams, 20, as he led a march Sunday evening.

"We're out here for justice and peace. We're not out here to hurt," Williams said.

TEHRAN (Tasnim) - A retired employee of Iran's Defense Ministry has been hanged for providing the US Central Intelligence Agency ...

Over 650,000 Indians evacuated from abroad amid pandemic

Russia's nuclear policy remains "defensive." However, a number of new conditions have been set for when a strike can be ...

Bahrain to execute two men 'convicted as result of torture'

MANAMA, Bahrain - The High Court of Bahrain has upheld death sentences against two pro-democracy activists who were charged and ...

Elvis's grandson dead at the age of 27, reportedly shot himself

Jail time for man who ripped off thousands of U.S. troops and veterans

SAN ANTONIO, Texas - A man who hacked into the U.S. military's databases and stole personal information relating to thousands ...

SYDNEY, NSW, Australia - Stocks in Asia fell on Tuesday inline with overnight falls on Wall Street.Stocks rallied around the ...

The COVID-19 pandemic's toll on economic activity in recent months is only the beginning of the story. While the rapid ...

SYDNEY, Australia - Stocks advanced on Monday in a positive start to the week.The big action was in Tokyo where ...

UK to spend hundreds of millions of pounds on border infrastructure