Yanks' Gerrit Cole back for series opener vs. Orioles 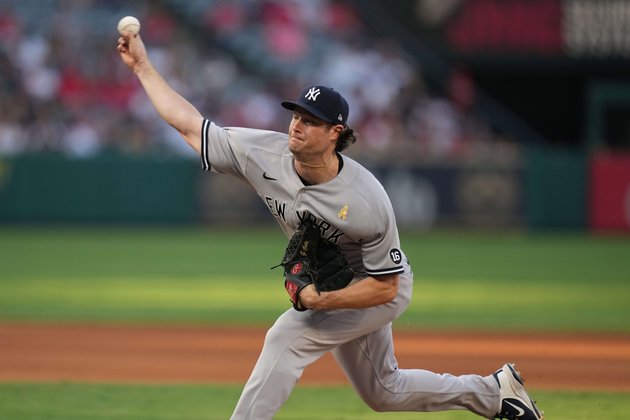 When Gerrit Cole returns from a minor hamstring injury Thursday night, he will pitch with a reconfigured infield behind him.

Cole will start for the visiting New York Yankees in the opener of a three-game series against the Baltimore Orioles.

Cole (14-7, 2.78 ERA) is taking the mound after tweaking his left hamstring in the fourth inning of his Sept. 7 start against the Toronto Blue Jays. The Yankees said it was left hamstring tightness and remained optimistic throughout the week until officially penciling in Cole for the outing at Baltimore.

Cole allowed three runs (two earned) and five hits in 3 2/3 innings against Toronto. He threw 70 pitches in an outing that saw him face several lengthy at-bats.

The right-hander is hoping to continue his success since returning from a 2 1/2-week stay on the COVID-19 injured list. Before the outing against the Blue Jays, he was 4-0 with an 0.74 ERA in four starts since returning and was coming off a 15-strikeout performance against the Los Angeles Angels on Sept. 1.

While Cole has become a fixture on the mound for the Yankees, his defense will look different at three infield positions. New York manager Aaron Boone moved Gleyber Torres from shortstop to second base following a rough stretch on defense. The change resulted in Gio Urshela going from third base to shortstop and DJ LeMahieu moving from second base to third.

"As far as the defense positioning, I'm on board with whatever Aaron thinks is going to help us win," Cole said.

Torres scored the winning run in the 10th inning Monday as Gary Sanchez's single gave the Yankees a 6-5 win. Sanchez's hit occurred after Aaron Judge hit a game-tying, three-run homer in the eighth and marked New York's first comeback win after falling behind by more than three runs this season.

The Yankees (80-64) head to Baltimore with just four wins in their past 16 games following a 13-game winning streak Aug. 13-27. Two of those losses were one-run defeats to the Orioles, who are coming off a dreadful pitching performance against the Toronto Blue Jays.

Baltimore (46-97) dropped the final three games of a four-game weekend series and allowed 44 runs in the three contests. The Orioles gave up 44 runs in a three-game span for the first time since 2007.

On Sunday, the Orioles followed up a doubleheader sweep by Toronto by taking a 22-7 loss as they allowed five homers, including two grand slams, to raise their team ERA to a major-league-worst 5.93.

"As you see, it's mid-September and we are in an evaluation mode right now," Baltimore manager Brandon Hyde said. "Lot of these guys are appearing in the big leagues with not a lot of appearances early on in their career."

Wells last pitched Sept. 7 in a no-decision against the Kansas City Royals, when he allowed two runs on five hits in four innings.

The 24-year-old Australia native will face the Yankees for the second time in his first major league season. He will hope for a significantly better showing than he produced Aug. 3 in New York, when he was tagged for six runs on seven hits in 2 1/3 innings of a 13-1 loss that started Baltimore's 19-game skid.

ASUNCION, Paraguay: The Paraguay River experienced the steepest decline in its water levels in more than 117 years on September ...

ROME, Italy: Hundreds of Alitalia workers stopped highway traffic as they blocked an airport exit on Friday to protest that ...

PRAGUE, Czech Republic: The right-of-center Czech party, the SPD, which could be part of a new Czech government next month, ...

Experts say, after hurricanes, flood insurance rates to rise in US

NEW YORK CITY, New York: According to a study released by financial services provider LendingTree on Tuesday, updates to the ...

WASHINGTON D.C.: The World Organization for Animal Health said the first outbreak of the African swine fever, a fatal pig ...

UK reports shortages nationwide due to lack of truck drivers

LONDON, England: With Britain remaining short of tens of thousands of truck drivers, shortages throughout the country range from gasoline, ...

GLASGOW, Scotland: Energy provider INEOS has announced that it will convert its large-scale petrochemicals plant and oil refinery in Grangemouth, ...

CHICAGO, Illinois: Housing sales in the United States fell in August amid sustained supply shortages, with indications that the housing ...

Uncut diamond, at 1,175-carats, is third largest in world