By The Numbers: Ravens vs. Bengals 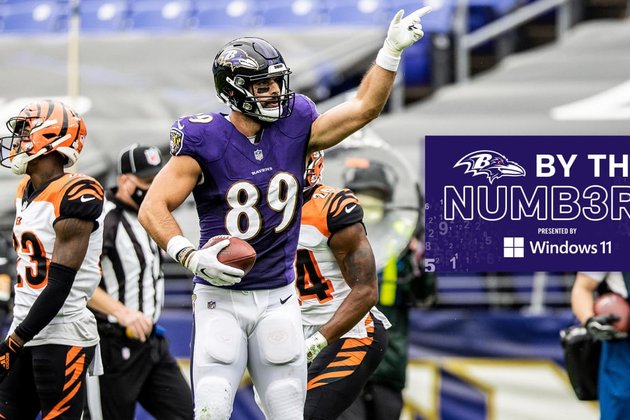 Lamar Jackson's career record against the Bengals as a starter.

Combined score of the last three Ravens-Bengals games, with Baltimore winning each. Last season, the Bengals scored just six points in two games against the Ravens.

Rushing yards Jackson has against the Bengals - more than against any other team in his career. He has averaged 87.2 rushing yards in his five games as a starter.

Receiving yards for tight end Mark Andrews this season, tied for the most among NFL tight ends with Kansas City's Travis Kelce

Sacks Justin Houston needs to reach the 100-sack mark for his career. He would become the 37th player in NFL history to reach the milestone.

Amount of the Ravens' offensive yards Jackson has accounted for this season, up from 65% last season. It's the largest increase in the NFL.

Rushing yards by Joe Mixon this season, ranked fourth in the NFL. In seven games against the Ravens, Mixon has averaged just 55 rushing yards.

Red-zone touchdown percentage for the Bengals offense, ranked third best in the league

Times Joe Burrow was sacked in his career debut against the Ravens last season at M&T Bank Stadium. Burrow completed 19 of 30 passes for 183 yards and an interception and fumbled twice.