Late for Work 10/22: What Pundits Expect in Ravens-Bengals Showdown 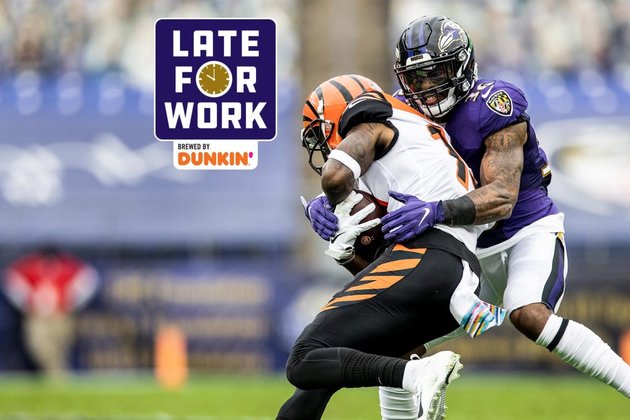 Before the start of the season, it's unlikely many people believed the Ravens' first AFC North contest, against the Cincinnati Bengals in Week 7, would be a showdown for first place in the division.

But here we are, thanks to Cincinnati being a much-improved team. After winning just six games over the past two seasons, the Bengals are 4-2, one game behind the Ravens, who are looking to go 6-1 for the first time in franchise history.

To steal a line from Aaron Rodgers, Lamar Jackson has owned the Bengals. He's 5-0 against them, with Baltimore outscoring Cincinnati, 114-19, in their past three meetings. Of the 47 pundits we sampled, 44 believe Jackson and the Ravens will make it six straight wins over the Bengals.

However, the prevailing opinion is that it won't be another blowout. Nineteen of the 27 pundits who predicted the score believe the game will be decided by seven points or less.

Here's a sample of what the pundits are saying about the game:

The Ravens made a statement last week with their rout of the Chargers. This is the Bengals' opportunity to make a statement of their own.

NFL Network's Judy Battista: "This is a game that if you are an ascending team and you want to put the league on notice, this is the kind of game you have to win. The Baltimore Ravens are among the NFL's elite. They are the best team in the AFC right now. They are a perennial playoff team. They have a quarterback who is playing at an MVP level again. And the Baltimore Ravens have dominated the Bengals in the last few years. ... This, though, is a much improved, much improved Bengals team on both sides of the ball."

FanSided's Matt Vederame: "Best game of the week. If the Bengals win, they've arrived as a playoff team. If not, the Ravens are 6-1 and rolling towards a division title."

The Ravens and Bengals could be battling for AFC North superiority for years to come.

ESPN's Jamison Hensley: "It would surprise people if Ravens-Bengals turned into the new Ravens-Steelers. The expectation was for the Cleveland Browns to be Baltimore's main competition for the division title. But this is a quarterback-driven league, and the Ravens and the Bengals clearly have the best quarterbacks in the division. As long as the Bengals can build a supporting cast around [Joe] Burrow like the Ravens have done with Jackson, these teams could be battling for the top spot for the next decade."

A revamped defense has played a major role in the Bengals' success this season.

The Ringer's Kaelen Jones: "Third-year Defensive Coordinator Lou Anarumo's unit currently ranks fifth in defensive DVOA. The 55-year-old's defense has kept Cincinnati in games when its offense has sputtered and has maintained leads when everything's clicked, holding opponents to 18.5 points per game, the NFL's fifth-lowest mark. According to Ben Baldwin's database, the Bengals defense ranks third in opponent success rate (40.5 percent) and seventh in expected points added allowed per play (negative-0.3). Cincinnati has given up explosive passes at the ninth-lowest rate (8 percent) and is 19th in explosive run rate allowed (11 percent), per Warren Sharp's database."

CBS Sports' John Breech: "The biggest surprise of the season for the Bengals so far has been their defense. If you watched the defense play last year, they were absolutely atrocious. Imagine watching Derrick Henry play football against a group of elementary school kids and you'll have an idea of just how bad the Bengals defense was last year. They're definitely better this year, but I won't know how much better until I see them play against the Ravens and that's because the Ravens have the one offense in the NFL that the Bengals can't figure out. In the last three meetings between these two teams, the Ravens have gone 3-0 while averaging 38 points per game."

LT Alejandro Villanueva vs. DE Trey Hendrickson is a matchup to watch.

Russell Street Report's James Ogden: "Hendrickson is top ten in both sacks and pressures coming into this game, with 5.5 and 20 respectively. Villanueva will have his hands full in pass protection but will also need to dominate Hendrickson as a run blocker with the right edge of the defense being the Bengals' main weakness in the run game."

The Baltimore Sun's Jonas Shaffer: "Inside the matchup of the AFC's top team and, in [Head Coach John] Harbaugh's words, 'one of the best teams' in the NFL is the receiver-cornerback clash that could shape the rivalry for years to come. Sunday's game could be the first of many in which Humphrey vs. Chase is a worthy undercard to Lamar Jackson vs. Joe Burrow."

This is an important game for Ravens running backs.

Baltimore Positive's Luke Jones: "With Latavius Murray's status in doubt, this game is pivotal for the running backs with the trade deadline rapidly approaching. Can Devonta Freeman and Le'Veon Bell take advantage of increased touches? Will Ty'Son Williams reestablish himself? Or does Sunday cement Eric DeCosta's need to add a back with more upside?

Jackson gives the Ravens the edge, particularly with outside runs.

Sporting News' Vinnie Iyer: "This game comes down to a key drive in the fourth quarter with Jackson coming through at home."

CBS Sports' Pete Prisco: "I expect the Bengals offense to move the ball with Joe Burrow, so it will come down to whether they can slow Lamar Jackson. I don't think they can. The Ravens win it, but it's close."

CBTavon Young is the Ravens' X-factor.

Baltimore Beatdown's Vasilis Lericos: "The slot battle between [Tyler] Boyd and Tavon Young will be pivotal in this AFC North contest. Boyd has been underutilized lately with just five catches for 31 yards on eight combined targets over his last two games. He has traditionally performed well against the Ravens. ... Young's man coverage ability can help the Ravens defense maintain their fifth-best third down conversion percentage (32.8). Yet if Boyd can uncover, Burrow will have options to evade Baltimore's pass rush, likely inserting the Ravens into another fourth quarter dogfight."

Mark Andrews Is No. 1 in NFL.com's Tight End Rankings

As noted by our Clifton Brown yesterday, Mark Andrews is making a case as the best tight end in the NFL with his performance this season.

Six-time Pro Bowl and three-time All-Pro tight end Travis Kelce of the Kansas City Chiefs has been the standard-bearer at the position for the past several years, but NFL.com's Nick Shook put Andrews at No. 1, one spot ahead of Kelce, in his rankings of the top 10 tight ends through six weeks of the season.

"Andrews' placement atop this list should only be a surprise if you haven't tuned into Baltimore in the last few weeks," Shook wrote. "Andrews once made his name as Lamar Jackson's clear top target. But he's found an arguably even more valuable role in Baltimore's offense, transforming from a relied-upon pass-catcher on every down into a tight end who produces at a higher rate than anyone else at his position.

"Andrews is more than just a quality option now - he's a centerpiece to Baltimore's attack."

Andrews is tied with Kelce for most receiving yards among tight ends (468), but has done it with nine fewer targets. Andrews is on pace for 96 catches and 1,326 yards (in a 17-game season), which would be career-highs.

Wink Martindale is widely regarded as one of the best defensive coordinators in the league, and Baltimore Beatdown's Joshua Reed said Ravens fans should enjoy him while they can.

Reed believes Martindale will be a highly sought-after candidate during the next head coach hiring cycle.

"Martindale is one of the most brilliant, creative, and innovative defensive minds in the game who possesses all the intangibles that an organization looks for in a head coach and leader of men," Reed wrote. "He's a player's coach who knows how to motivate, make the best of the available personnel, and puts the pieces at his disposal in the best possible position to disrupt opposing offenses."

The Ravens' defense has ranked in the top three in fewest points allowed every season since Martindale became defensive coordinator in 2018. He's coming off arguably the best game he's called this season, as the defense smothered the Chargers' offense, which had been rolling.

"He devised a plan that limited one of the most potent offenses in the league to just 208 total yards and utterly dumbfounded ascending second-year signal-caller Justin Herbert, who was among the front runners for league MVP heading into the matchup, with disguised coverages and pressure packages," Reed wrote.

Martindale interviewed to be head coach of the New York Giants after the 2019 season before they hired Joe Judge. Martindale did not get an interview last year.

It was noted in yesterday's Late for Work that bolstering the offensive line figures to be one of the Ravens' priorities if they are looking to make additions to the team before the Nov. 2 trade deadline.

Bleacher Report's Brent Sobleski named Dallas Cowboys right tackle La'el Collins as the ideal trade candidate for the Ravens. Collins started all but one game for the Cowboys over the past three seasons.

"La'el Collins has been reinstated after his five-game suspension [for violating the NFL's substance abuse policy], yet he might find himself without a starting job," Sobleski wrote. "Terence Steele played very well for the Dallas Cowboys to open this season, and considering his improvement and Collins' salary increase after this year, the Cowboys may consider a move. The Ravens don't have much salary-cap space, but they can handle the prorated portion of Collins' $1.55 million base salary."

Meanwhile, ESPN's Bill Barnwell identified the New York Jets' Morgan Moses as a trade target for the Ravens. Before signing with the Jets this offseason, Moses started every game for Washington at right tackle for the previous six seasons.

Barnwell proposed a trade in which the Ravens would acquire Moses for a 2022 fourth-round pick.

"If the Ravens want to move Villanueva back to the right side, they could pursue Seahawks left tackle Duane Brown. It would likely be easier to keep Villanueva on the left side, which would mean targeting a right tackle," Barnwell wrote. "Moses, signed to a one-year deal by the Jets, is a capable right tackle with a track record of staying healthy. The Ravens might value availability more than ability at this point."

Harbaugh said earlier this week that he "couldn't be more pleased" with Patrick Mekari's performance at right tackle this season, but the Ravens could add more depth on the offensive line. Baltimore does have right tackle Ja'Wuan James (Achilles) potentially waiting in the wings for a late season return.