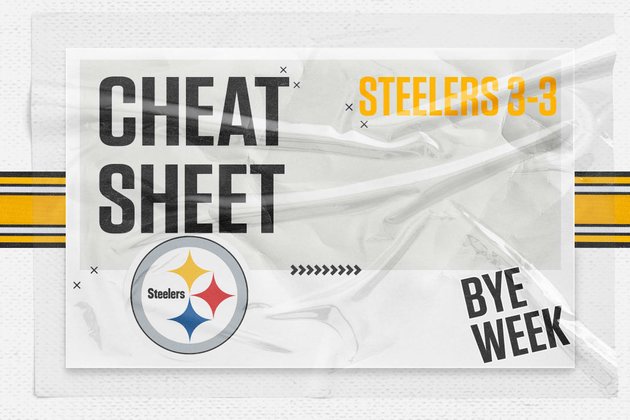 With the Steelers on a bye for Week 7 of the 2021 NFL season, take a moment to catch up on the team's performance on both sides of the ball and what it means for the weeks ahead.

The Season so Far

After a two-game winning streak, the Steelers now sit at 3-3. They are 2-2 at home and 1-1 on the road. Pittsburgh lost their only AFC North matchup thus far and are 2-2 against conference opponents. They average 19.5 points scored per game, which is 25th in the NFL and are allowing 22 points scored per game, which ranks 12th. The Steelers six opponents' collective record right now is 22-14, and their total point differential sits at +160. The 2-4 Seahawks are the only team that Pittsburgh has played that currently has a losing record. There are currently six teams in the league with a record of 3-3. All have positive point differentials except the Steelers and Bears. If we count Cleveland's and Baltimore's records twice, the Steelers remaining 11 opponents have a combined record of 37-29 with a point differential of +34.

The Steelers offense averages 5.1 yards per play. Only the Texans, Lions, Dolphins, Jets, and Bears are worse. Pittsburgh's defense allows 5.6 yards per play, which ranks 15th. On a yards per game basis, Pittsburgh's offense ranks 25th in the NFL, averaging 323.8 yards per game. The Steelers running game averages 81.2 yards per game, which ranks 29th in the league, while their passing attack ranks 17th averaging 242.7 yards per contest through the air. The Steelers offense is averaging just 2.3 points scored in the first quarter of games. Detroit, Washington and both New York teams are the only offenses that are worse. Pittsburgh is producing .31 points per offensive play they run. That ranks 26th in the NFL. Every other AFC North team ranks in the top 11 in the league. The Steelers allow just 2.0 sacks per game. Just 12 teams allow fewer on a per-game basis. Pittsburgh's 79% usage of 11 Personnel is the third highest in the league behind Washington and the Rams. League average is 58%. Five offenses (Baltimore, Buffalo, Minnesota, San Francisco, and Washington) use 12 at a lower percentage of the time than the Steelers. Pittsburgh is in 12 Personnel on 14% of their snaps. League average is 22%. The Steelers offense is snapping the ball on third downs 13.3 times per game. Only six teams are higher. But the Steelers offense is converting on 42.5% of their third down tries, which ranks 11th in the NFL. Excluding overtime, the Steelers rank 16th in time of possession. They are holding the football for two seconds more per game (30:01) than their defense is on the field for (29.59). Pittsburgh also is snapping the football per minute of playing time at the 22nd fastest pace in the league.

In the past two games, both victories for Pittsburgh, the Steelers have thrown the ball on 43% and 60% of the plays, respectively. But at no point against Denver or Seattle did the Steelers trail on the scoreboard by four points or more. They now throw the ball at the ninth highest rate in the league. Ben Roethlisberger is getting the ball out of his hands, on average, in 2.36 seconds. Of qualifying quarterbacks, this is the quickest in the NFL. For contrast, Andy Dalton is next at 2.46, followed by Tom Brady at 2.53. There are four quarterbacks, Jameis Winston (3.07), Lamar Jackson (3.07), Zach Wilson (3.08), and Trey Lance (3.12), that hold it for over three seconds. Najee Harris has more targets in the passing game than any running back in the NFL. Roethlisberger's 6.9 average intended air yards is deeper downfield than only six qualifying quarterbacks. Andy Dalton is the lowest at 4.2 and Matt Ryan is next at 6.2. Lamar Jackson is the only quarterback over 10. Jackson's average depth of target is at 10.1. However, in each of the past three games, Roethlisberger's average depth of target has exceeded 7.0. That is in stark contrast to the first three games of the 2021 season. In his last four games, Johnson has caught 29 passes for 340 yards. Johnson has played in five games this year and has received at least a 30% target share in four of those contests, including 32% of the targets last week against Seattle. For the season, Diontae Johnson's average depth of target sits at 10.3. Chase Claypool's is at 12.3 yards downfield. Injuries have been a factor, but Pittsburgh has five wide receivers that have played between 141 (Ray Ray McCloud) and 277 (Diontae Johnson) offensive snaps. The Steelers tight end snaps counts so far are as follows: Pat Freiermuth at 201, Eric Ebron at 185 and Zach Gentry with 97. Gentry has only run 13 routes this year. On pass plays, Freiermuth and Ebron have only stayed into block on six snaps apiece. Freiermuth has been on the field for 115 pass plays and Ebron for 134.

Pittsburgh has run 397 offensive plays in 2021. Roethlisberger has been on the field for every snap. His starting offensive line, Kevin Dotson (386), Trai Turner (386), Kendrick Green (385), Dan Moore (381), and Chukwuma Okorafor (304), are the only other offensive players other than Najee Harris (343) to see the field for more than 300 snaps of offense. In relief work, Joe Haeg has contributed by playing 109 (27%) snaps thus far in a Steelers uniform.

On the defensive side of the ball, Pittsburgh allows 352.3 yards per game which ranks 12th. The 107.7 yards given up on the ground per game is 11th in the league while the 244.7 allowed through the air currently ranks 15th. Only the Saints, Jets, Bears, and Bills have better red zone defensive numbers than Pittsburgh's. The Steelers defense ranks fourth in the league in terms of giving up first downs per play run. Only the Bills, Broncos and Panthers are better. Pittsburgh's defense is forcing their opponents to snap the ball 13.2 times per game. Eight defenses are higher. The Steelers are sacking opposing quarterbacks 2.5 times per game, which ranks ninth in the NFL. Pittsburgh's defense has taken the ball away just five times this year. Only five teams have fewer takeaways. Pittsburgh's defense has been on the field for 395 plays this year. Minkah Fitzpatrick is the only defender to play all 395. Terrell Edmunds is just behind him at 385 and Joe Schobert (342), Joe Haden (329), Cameron Sutton (327), and Cameron Heyward (314) are the others to have logged more than 273 snaps. Fitzpatrick, Edmunds, Haden, and Sutton have a very high snap count, but the rest of Pittsburgh's secondary usage is interesting as well since James Pierre, Tre Norwood and Arthur Maulet have each been on the field between 127 and 221 snaps. On the defensive line, Chris Wormley's 273 snaps played is next behind Heyward, but after that there is a drop off to Isaiah Buggs (107), Isaiahh Loudermilk (61), Tyson Alualu (57), Henry Mondeaux (54), and Carlos Davis (17). Amongst Pittsburgh's defensive backs and second level defenders, Devin Bush leads in that group with 12 pass rush snaps followed by Maulet with 11. TJ Watt, Alex Highsmith, and Melvin Ingram have all played between 235 and 252 snaps. And the three of them have each dropped into coverage between 10 and 19 times.