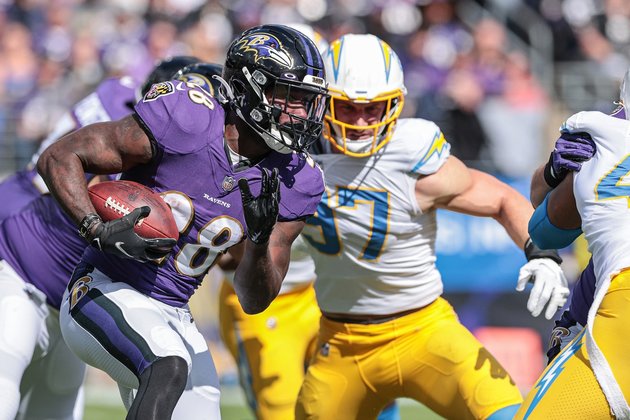 The Baltimore Ravens will be missing at least two offensive starters for a key AFC North battle against the Cincinnati Bengals Sunday. Running back Latavius Murray and wide receiver Sammy Watkins have both been ruled out after not practicing this week.

Devonta Freeman projects as the likely starter at running back, while rookie Rashod Bateman, who got 45 snaps and six targets last week, should see lots of time filling in for Watkins.

An eight-year veteran and two-time Pro Bowler, Freeman has rushed for 95 yards on 16 carries with one touchdown this season in a reserve role.

In other injury news, two offensive linemen, Bradley Bozeman and Alejandro Villanueva, are both listed as questionable after being limited in practice Thursday and Friday, while linebacker Patrick Queen and cornerback Tavon Young are also questionable.

The Bengals, on the other hand, look healthy coming into the matchup, with only cornerback Jalen Davis and defensive tackle Tyler Shelvin (both backups) listed as questionable.