Everything You Need to Know: Ravens vs. Bengals 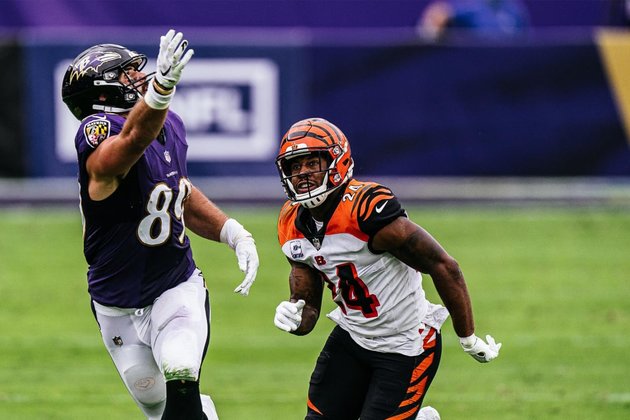 The Ravens have a chance to be 6-1 for the first time in franchise history. A victory would extend their winning streak to six games and give them a two-game lead in the AFC North as they head into their Week 8 bye. A Bengals victory would move them into first place in the division, holding the tie-breaker edge over Baltimore.

The Ravens have a five-game winning streak against Cincinnati and hold a 27-23 advantage in the all-time series. Baltimore has dominated recently, winning the last three meetings by a total margin of 114-19. Their last encounter was in Week 17 last season, when the Ravens rolled to a 38-3 victory in Cincinnati. Lamar Jackson threw two touchdown passes to Marquise "Hollywood" Brown and one to Miles Boykin, and Jackson also rushed for 97 yards on 11 carries. The Ravens defense held Cincinnati to 195 yards of total offense and Chuck Clark had an interception.

Do the Bengals have an answer for Lamar Jackson?

Jackson is 5-0 against Cincinnati as a starter, rushing for more than 100 yards against them twice and throwing for three touchdown passes twice. The Bengals added plenty of talent to their defense this offseason,[comma] including Trey Hendrickson, Chidobe Awzuie, Mike Hilton and Larry Ogunjobi. Will that make a difference against Jackson? We're about to find out.

Can Joe Burrow get the best of Baltimore's blitz pressure?

Burrow hasn't faced the Ravens since Week 5 last season, when they sacked him seven times, forced him to fumble twice and cruised to a 27-3 win. For the Bengals to challenge Baltimore, Burrow has to play better. He has more weapons this year, with star rookie Ja'Marr Chase joining Tyler Boyd and Tee Higgins in a talented wide receiver group. But the Ravens are going to bring pressure, and Cincinnati's offensive line will have to protect Burrow from being pummeled by whatever Defensive Coordinator Wink Martindale dials up.

Can Ravens overcome even more injuries?

Baltimore was already hit hard at running back with J.K. Dobbins, Gus Edwards and Justice Hill suffering season-ending injuries in the preseason. Now Latavius Murray, who has been the leading rusher since, has been ruled out with an ankle injury. That leaves Devonta Freeman and Le'Veon Bell likely carrying the load against the Bengals. Can the two former Pro Bowlers turn back the clock and keep the Ravens ground game rolling?

There will be interesting matchups all over the field, with Chase, Boyd and Higgins going against Marlon Humphrey, Anthony Averett, Tavon Young, Jimmy Smith and the Ravens' safety tandem of Chuck Clark and DeShon Elliott. Burrow isn't afraid to throw into tight windows, giving his playmakers a chance to win one-on-one battles. However, Burrow has already thrown seven interceptions and Baltimore's secondary will have a chance to make plays.

The NFL's fourth-leading rusher, Mixon is averaging 4.2 yards per carry and can run effectively inside and outside. Tackling has been a problem for Baltimore at times this season and Mixon is excellent at keeping his feet after contact. The Ravens' run defense was superb in Week 6 against the Chargers, with inside linebacker Josh Bynes joining the starting lineup and settling down the entire front seven. The Ravens will try to shut down Mixon and make Cincinnati one-dimensional, making it easier to unleash the pass rush on Burrow.

It seems the Ravens have faced an elite pass rusher almost every week and Hendrickson will be another. He enters the game with 5.5 sacks (tied for ninth in the league) and 20 quarterback pressures, and Baltimore's offensive line will be challenged to neutralize Hendrickson and defensive tackle B.J. Hill, who has three sacks. If Jackson is given time in the pocket, his success against Cincinnati is likely to continue.