VANCOUVER, BC / ACCESSWIRE / May 11, 2022 / Marvel Discovery Corp. (TSXV:MARV), (FRA:O4T1), (OTCQB:MARVF); ('Marvel', or the 'Company') is pleased to announce a Joint Venture agreement to expand our land position within the Rocky Mountain Rare Metal Belt. The Company has the right to earn a 50% interest from a private company, Eagle Bay Resources, upon completion of at least 2 (two) drill holes. The 507 hectarehectare claim block is located immediately adjacent to the west of the Wicheeda Project of Defense Metals.

Defense Metals has recently been expanding the value of their Wicheeda Project through deposit definition drilling. Recently announced results (April 21, 2022) include 3.81% TREO over 116.8 metres, including two separate higher-grade intervals averaging 4.33% TREO over 38.8 metres, and 4.87% TREO over 37.5 metres. (Mineralization hosted on adjacent and/or nearby properties is not necessarily indicative of mineralization hosted on Marvel's Property.)

Karim Rayani, President and Chief Executive Officer, commented, 'We are very excited with the current developments coming out of the Wicheeda Camp. Marvel is in a great position now as we control a sizeable area of influence, and we look forward to working with our new partner Eagle Bay Resources to explore this new territory.'

The Defense Metals Wicheeda REE Property is located in the Foreland Belt of the Canadian Cordillera, within the structurally dominant NW-trending Rocky Mountain Trench. The Rocky Mountain Trench is recognized for the occurrence of several Paleozoic carbonatite-syenite intrusion-related complexes that were geologically deformed, tilted, and transported to the east in thrust panels. The REE-enriched carbonatites located on the Defense Metals property is part of a narrow, elongate, southeast-trending intrusive carbonatite-syenite complex utilizing a structural panel within sedimentary sequences of the Cambrian to Ordovician Kechika Group.

Carbonatite-related rocks are exceptionally rare, with less than 700 complexes known worldwide. They are a major host for rare metals (REE's), such as niobium and tantalum, and rare earth elements (REE's), and are also known to host economic concentrations of copper, goldgold, and other base metals. The world's largest niobium mine, Araxa in Brazil, and several of the world's largest-rare earth element deposits, including Lynas Corporation's Mt. Weld deposit in Australia and MP Material's Mountain Pass Deposit in the United States, are all hosted by carbonatites. Mineralization and REE deposits described above are not necessarily indicative of the mineralization on the Property. 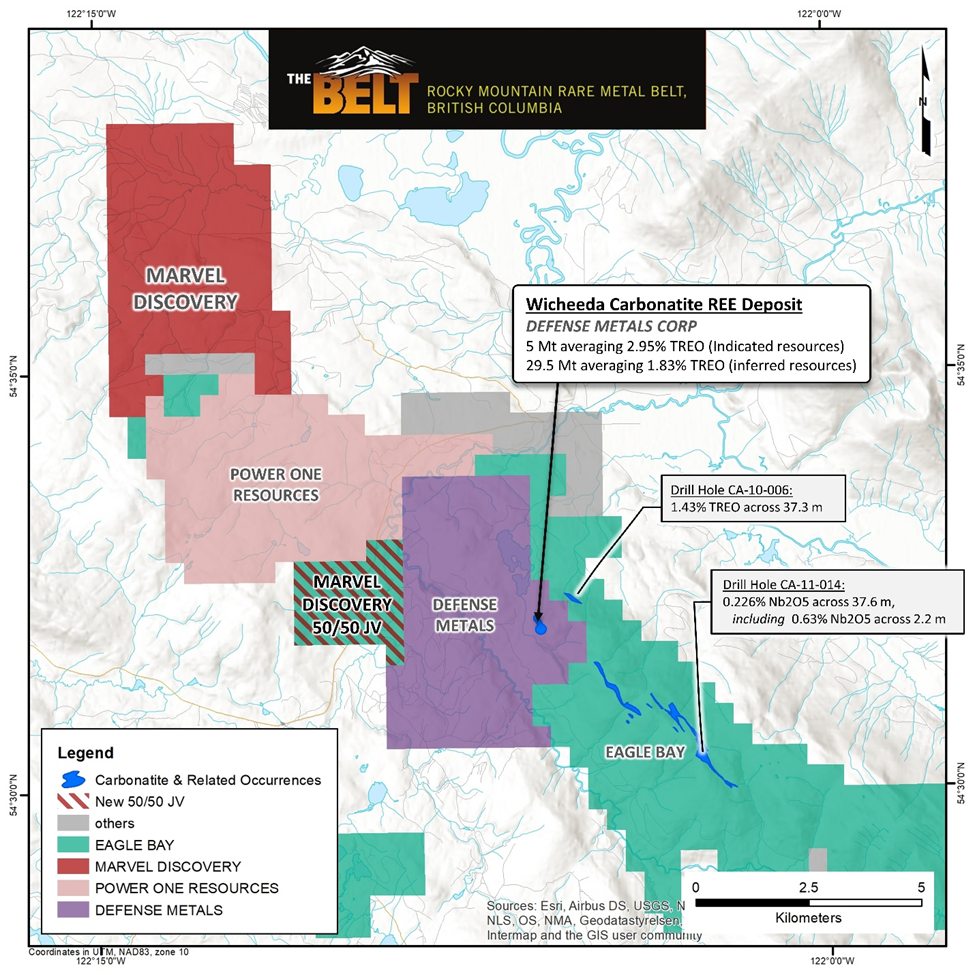 The technical content of this news release has been reviewed and approved by Neil McCallum, P.Geo., of Dahrouge Geological Consulting Ltd., who is a Qualified Person as defined by National Instrument 43-101, Standards of Disclosure for Mineral Projects.

Marvel, listed on the TSX Venture Exchange for over 25 years, is a Canadian based emerging resource company. The Company is systematically exploring its extensive property positions in:

ON BEHALF OF THE BOARD

DOLNI MORAVA, Czech Republic: The world's longest pedestrian suspension bridge has opened at a mountain resort in the Czech Republic. ...

SHAN STATE, Myanmar - According to an officer who participated in the assault, two local defense forces have destroyed a ...

TUNIS, Tunisia - The Tunisian navy said Saturday that it rescued 81 migrants, including 32 Bangladeshis, sailing from Libya to ...

ST. PETERSBURG, Florida: - A nearly $1 billion settlement has been agreed upon in a lawsuit brought by families of ...

The suspect is an 18-year-old white man heavily armed with tactical gear and a helmet, said Buffalo Police Commissioner Joseph ...

SAN JOSE, Costa Rica: President Rodrigo Chaves, who was sworn in as president on May 8, has declared a state ...

ATLANTA, Georgia: Mercedes-Benz USA has requested drivers to stop driving some of their autos immediately due to braking problems.The announcement ...

KARACHI, Pakistan - The U.S. dollar climbed past Rs194 in the interbank market in Pakistan on Monday as analysts expressed ...

ROME, Italy: Italy has announced plans to sell state-owned ITA Airways, the successor to Alitalia, by the end of June, ...

Stocks in Asia range-bound as markets contemplate next move

SYDNEY, NSW, Australia - Stocks struggled for direction in Asia on Monday. Early gains evaporated later in the data, although ...